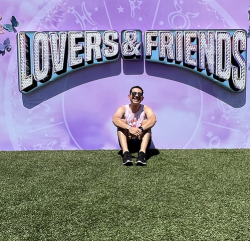 Candy Plascencia
Candy has been in the writing game for quite some time, writing and editing for magazines and online publications for many years. However, this was merely a path that would lead him to his dream job, writing about video games, and more specifically, Pokemon. Candy can't go a single day without checking in on his little pocket monsters, and if he manages to break away from Pokemon, you'll probably find him playing another Nintendo property.

One of my favorite scenes from the anime comes from episode 127, Once in a Blue Moon. Ash, Misty, and Brock decide to take a rest in Cherrygrove city, and at the time, Ash was traveling with the mysterious GS ball. Some of you may remember now, but this is the episode where a group of Quagsire manages to steal the GS ball.

In this video, you can see some Quagsire cheering and I love the roaring “QUAAAAAG.” However, today’s story isn’t about Quagsire, it is about its pre-evolution, Wooper.

Wooper, the water fish Pokémon, is a water and ground type that was introduced in Generation II. Wooper is a small Pokémon, weighing 19 pounds and is 1’ 4’’, that has a big head, small body, two stubby legs, a tail, no arms, and has two branches/gills on each side of its head. 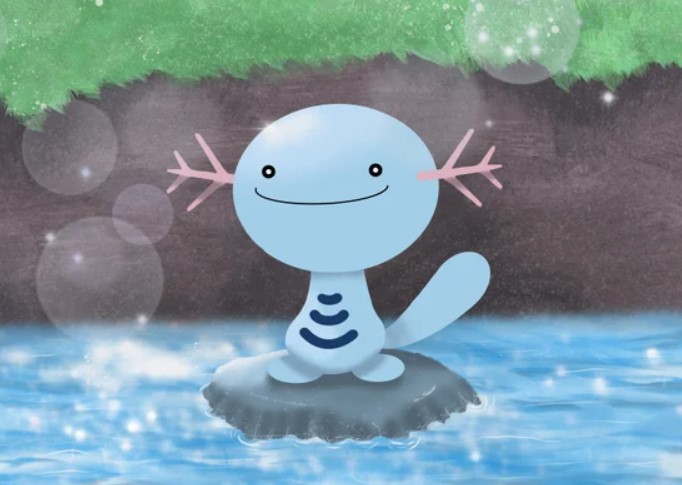 Wooper is a water and ground type that evolves into Quagsire at level 20. In Pokémon Sword and Shield, you can find Wooper in the South Lake Miloch, Giant’s Seat, Giant’s Cap Dusty Bowl, Rolling Fields, and West Lake Axwell (in Max Raid Battles). While in Brilliant Diamond and Shining Pearl, you can find Wooper in The Great Marsh, Route 212, and the Grand Underground.

Wooper is only weak to grass-type moves, is in the  Water 1 and Field egg groups, and can have three different abilities (Water Absorb, Damp, or Unaware). If you want to run Wooper in your Little Cup team, I suggest running it as a lead attacker, while Smogon suggests running it as a defensive wall. See some movesets below in the “Competitive Movesets” section.

To sum it up, Wooper prefers to spend its time in the water. They will leave the water in the evening when it is cold to search for food along the shore. When they do leave the water, they coat their bodies in a gooey, toxic film.

Most people, including myself, believe that Wooper is based on an Axolotl. According to an article published by the San Diego Zoo, an Axolotl is a type of aquatic salamander. Woopers in-game behavior is not that different from its real-life counterpart. The article states “During the day, they burrow into the aquatic vegetation and mud to avoid being eaten, and at night they become animated…and hungry.” They feed on small fish, mollusks, and crustaceans.

I have always found it interesting that you can learn a thing or two about a Pokémon inspiration just by reading a couple of Pokédex entries. 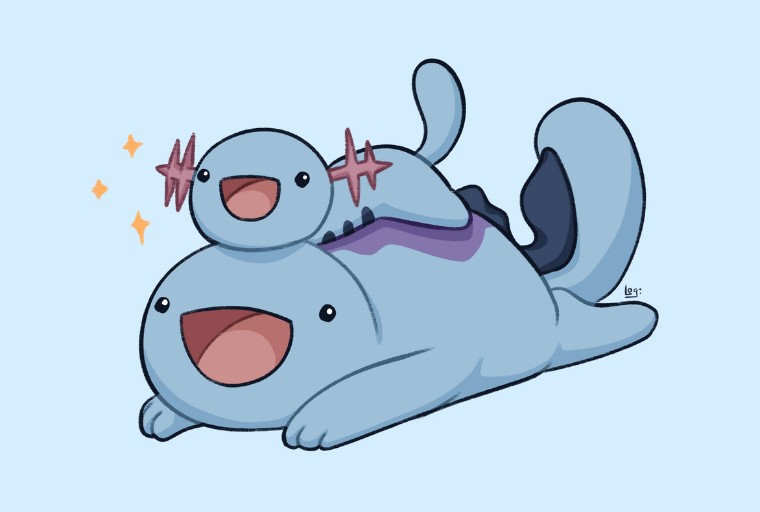 Wooper evolves into Quagsire at level 20.

Wooper and Quagsire are both part of the Water 1 and Field egg groups. If you’re looking to competitively breed or shiny hunt a Wooper through eggs, you will need a female Wooper or Quagsire and a compatible partner.

Since the two Pokémon fall into two different egg groups, they can breed with a lot of different partners. Some of the ones I found the most interesting were Dragonite, Heatmor, Mudkip, Umbreon, Inferape, Slacking, Lucario, and Arbok. However, if you do not have one of these Pokémon handy, you can always drop off Wooper or Quagsire at the Daycare with a Ditto.

Because of Wooper’s duel typing, it loses its weaknesses to water, ice, and electric attacks. However, since ground and water types are both weak to grass attacks, any grass attack will be extremely effective towards Wooper and Quagsire. A good counter against grass types would be ice-type moves and Wooper and Quagsire can learn a handful of them.

On the flip side, both Pokémon resist fire, steel, rock, and poison-type attacks, and take neutral damage from every other typed attack.

If I was casually playing through a game with Wooper or Quagsire, I would probably have it as my lead. With only one weakness, there’s a high chance the two can take the opponent’s lead. In terms of competitive play, check out the 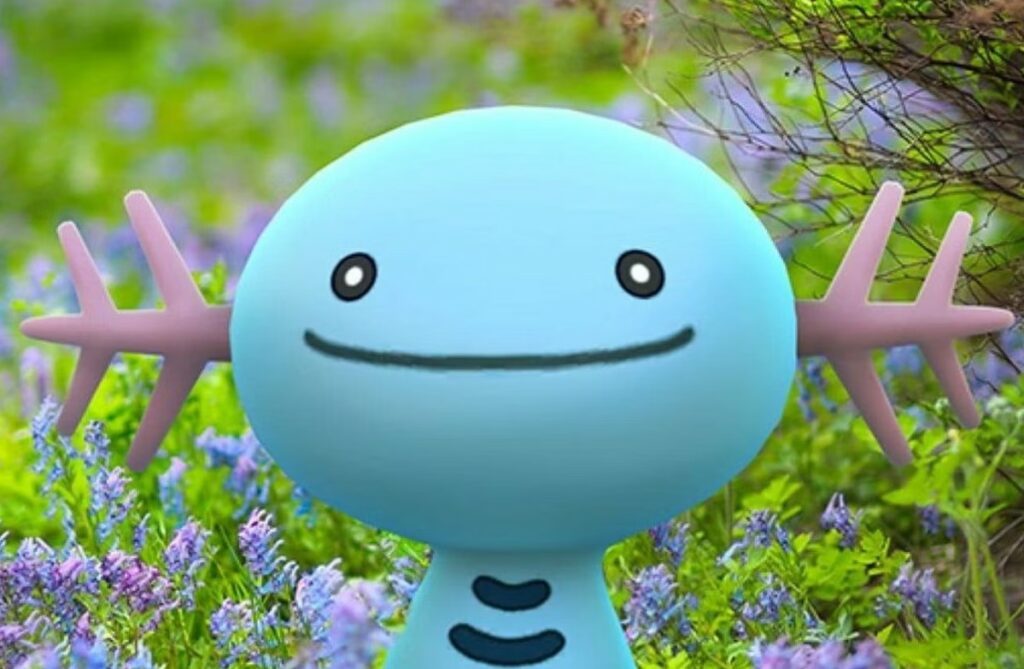 Wooper has made appearances in a good amount of side games, below you can find those games and how to obtain Wooper in them.

Wooper can have any of the following 3 abilities:

Water Absorb: When Wooper is hit by a water-type move, it will have no effect and restore one-fourth of Woopers HP (health points).

Damp: Damp prevents Woopers opponent from using self-destruct, explosion, mind blown (an exclusive move to Blacephalon), and misty explosion. Damp also prevents Wooper from taking damage from aftermath, an ability that causes the opponent to take damage if the opposite Pokémon was knocked out by a physical move.

Unaware (hidden ability): All stat-changing moves are ignored when Wooper attacks or is being attacked. For example, if a Pokémon uses an attack that raises its defense, Wooper’s attack will do normal damage instead of reduced damage. On the flip side, if a Pokémon uses a move that increases its attack and said Pokémon attacks Wooper, the attack buff will not affect Wooper.

Of the three, Water Absorb or Unaware would be the ability I’d pick if I was just casually playing through the game. NPCs in the game can’t really predict a switch in or out. So if you currently have a fire-type out facing a water-type, the opponent is likely to use a water-type attack. This is when you switch Wooper or Quagsire in to gain a bit oh health back.

On the flip side, stronger NPCs (like elite four members, champions, and Frontier brains) are capable of setting up stat-boosting moves and sweeping your team. A well-trained Quagsire with Unaware can potentially be a good counter against Pokémon who are beefing up their defense or raising their attack.

Moves by Level Up

Here you can find a list of moves Wooper can learn through leveling up. They are separated by the generation of the game: 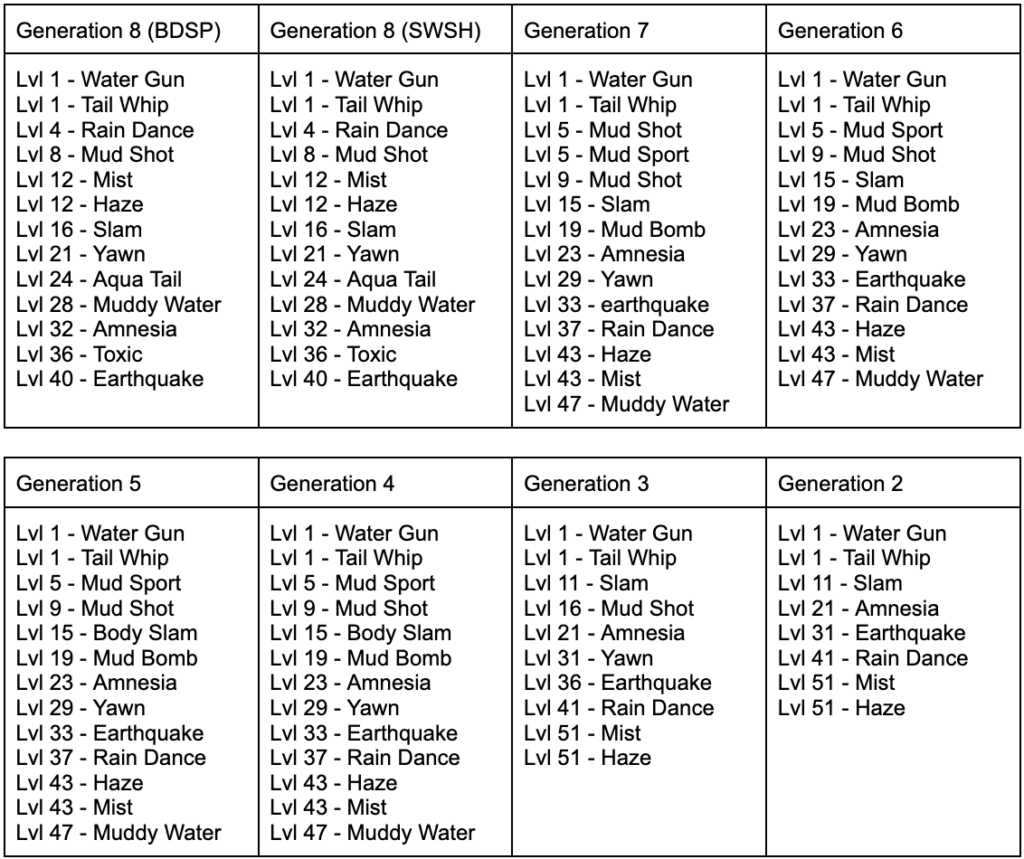 Here you can find a list of moves Wooper can learn through technical machines, hidden machines, and technical records. 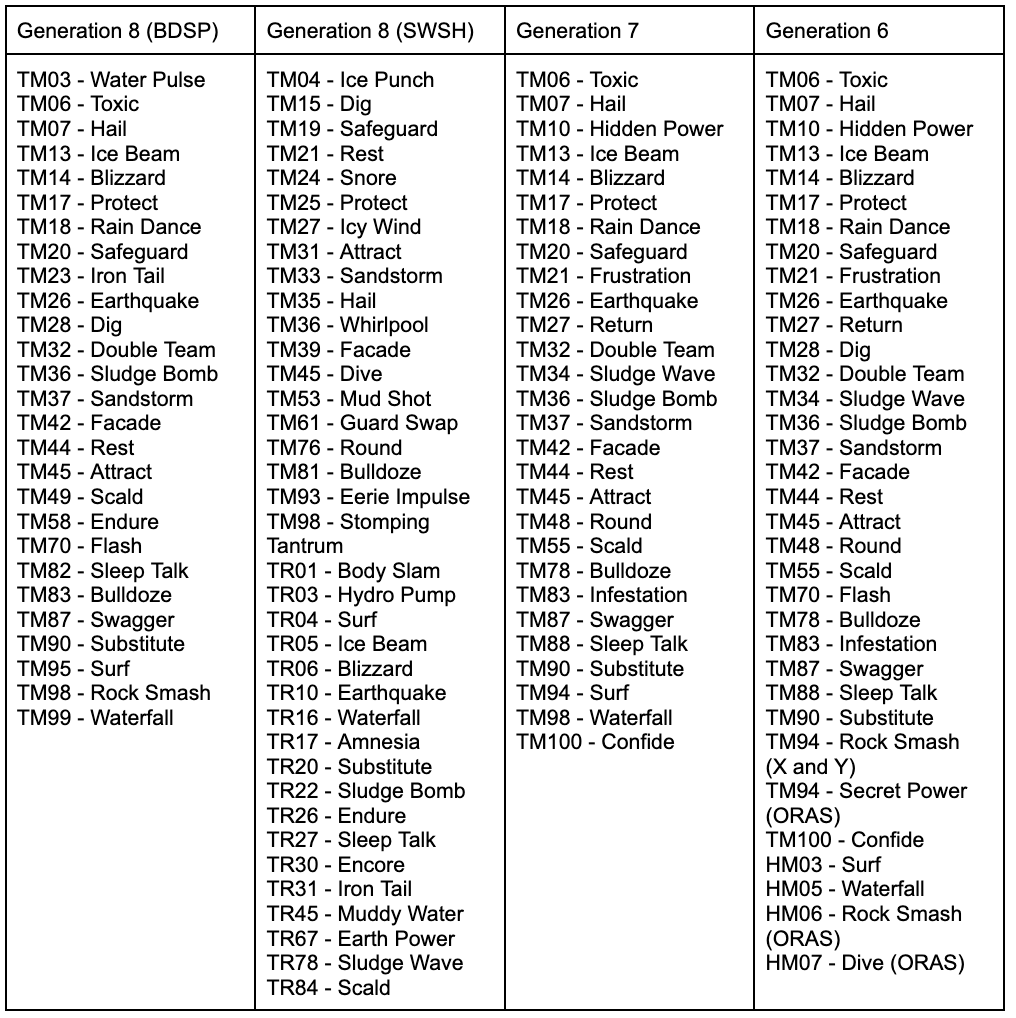 With each egg move, I also included one potential partner. 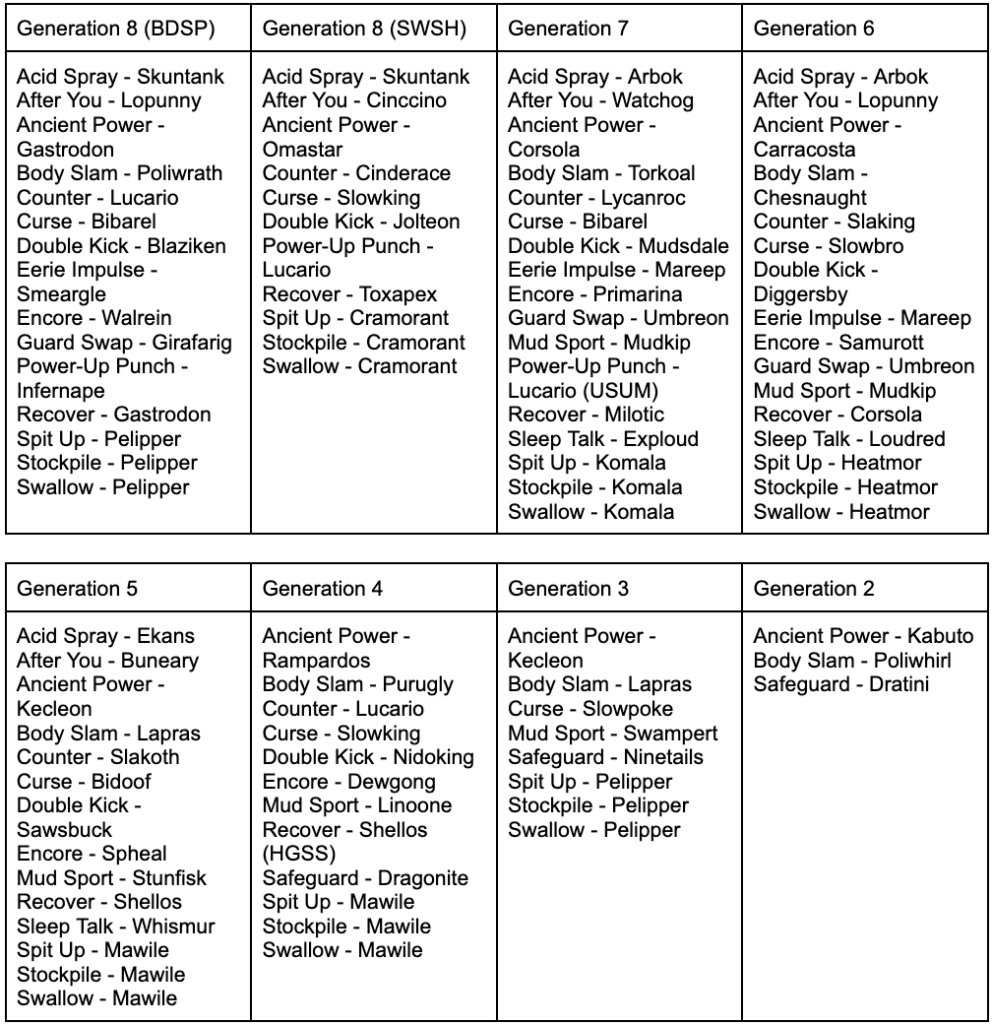 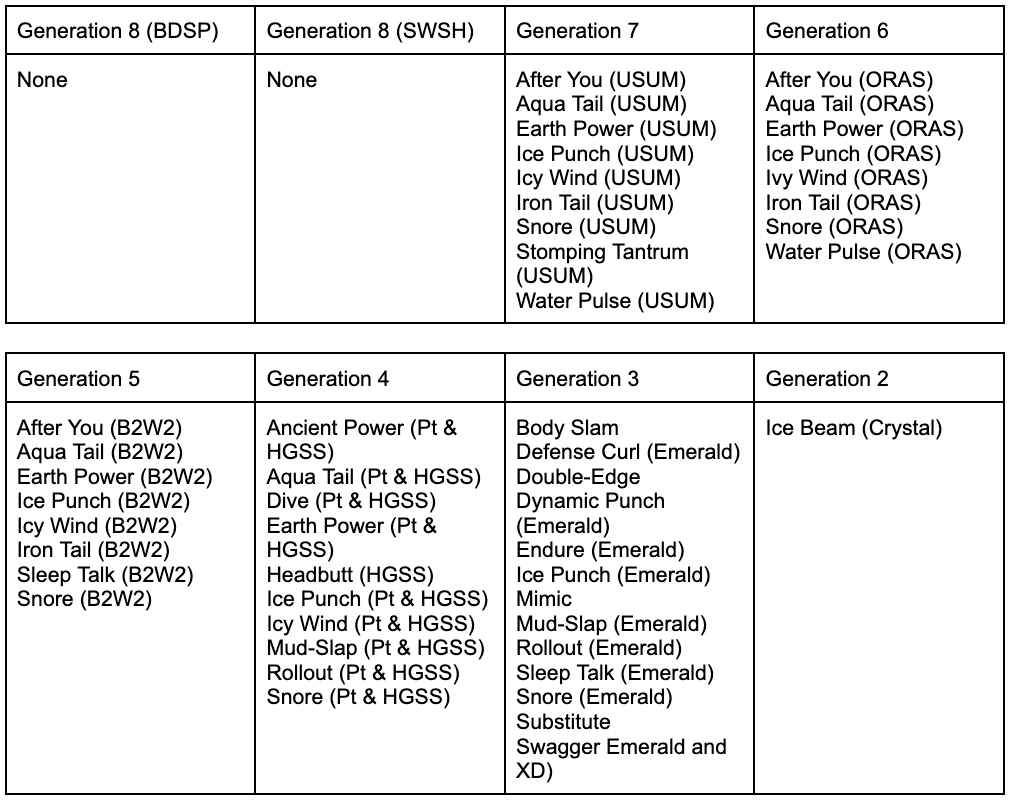 Wooper’s stats are as follows:

Since Wooper’s stats are not extremely high, it falls into the Little Cup League.

Wooper’s best stat is its health and its attack and defense are tied for second best. Wooper can also learn a wide variety of stab moves (moves that do extra damage if the type of the move matches Wooper’s typing) and coverage moves (moves to cover Wooper’s weakness).

If it was me, I would run it as my lead to hopefully knock out a couple of Pokémon or prevent their lead from setting up. I would give it a nature to help with its speed (Jolly or Naive), max out its attack and speed, and use the remaining EVs (effort values) for health.

Since Wooper is extremely weak to grass-type moves, I would give it a focus sash to prevent it from being knocked out in one hit. For the ability, either water absorb or unaware, but more leaning to unaware. Water absorb in the case of predicting a water-type attack to gain some health back, or unaware to knock out a Pokémon that starts setting up an attack or special attack buffs.

For its move set, I would run earthquake and aqua tail for stab moves and ice punch for coverage. For the fourth move, I would go with swagger to try and get some free hits in.

On the flip side, Smogon suggests running Wooper as a defensive wall. They suggest running Wooper with scald, recover, earthquake, and yawn or encore. They also suggest giving Wooper a sassy nature, an eviolite as a held item, and water absorb as an ability. For stats, 236 Evs towards defense, 156 towards special defense, and 76 towards health. 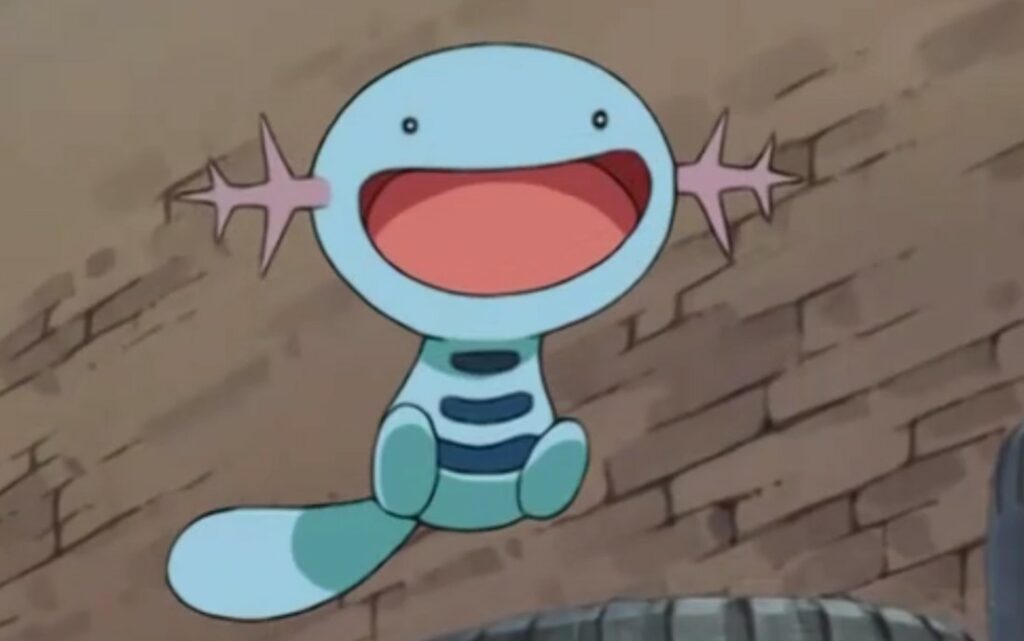 Wooper has made appearances in the anime numerous times, but the most prominent appearance(s) the Pokémon has made is in the X and Y series. During the series, Ash befriends and raises a Goomey and it eventually evolves into Sliggoo, and then Goodra. During various flashbacks, we learn that Ash’s Goodra was friends with a handful of Woopers when they lived in the wetlands together. You can see them in flashbacks Goodra has about home and battling alongside Goodra when Team Rocket attacks the wetlands.

Other than that, Wooper has also made some minor appearances in the anime. In Abandon Ship! (episode 32 of the Ruby and Sapphire series) a Wooper was living in the abandoned ship, in Octillery the Outcast (Episode 215 of the anime) a Wooper competes in a Pokémon tournament, and in From Z to Shining Z! (Episode 144 of the Sun and Moon series) a Wooper watches the battle between Ash’s Pikachu and Tapu Koko.

Unfortunately, Wooper has not made any major appearances in any of the movies. However, Wooper has made short appearances in Pokémon Heros: Latios & Latias, Lucario and the Mystery of Mew, Pokémon Ranger and the Temple of the Sea, The Rise of Darkrai Zoroark: Master of Illusion, Genesect and the Legend Awakened, and The Power of Us.

Wooper in the TCG 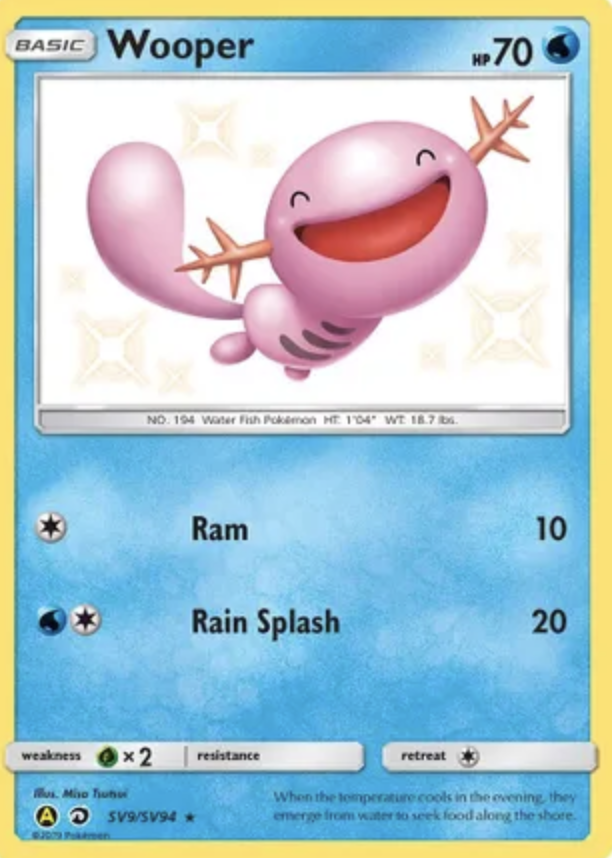 When it comes to the trading card game, Wooper makes a good amount of appearance in some expansion packs.

Of the various Wooper cards out there, my favorite is the Hidden Fates art. In the card, you see a shiny Wooper with a silver and white background, I enjoy the art and big smile Wooper has on.

Question: Is there a difference between male and female Woopers?

Answer: The difference between male and female Woopers can be seen in the gills on each side of its head. Males have eight branches on their gills while females have four.

Question: What games are Wooper and Quagsire missing from?

Answer: Instead of its main color being blue, it turns to light pink. With the gills/branches, they switch from purple to a darkish pink.

Question: Will Wooper be in the Pokémon Scarlett and Violet?

Answer: As of the writing of this article, Wooper has not made any appearances in the trailers for Scarlett and Violet. So, it is not confirmed or denied that the two will appear in the game.

Question: What is Woopers EV yield?

Answer: When defeated, Wooper will yield 1 HP (health point) EV (effort value).
They say every Pokémon is someone’s favorite, and while Wooper may not be mine, I enjoyed writing this article. It’s interesting to see how this Pokémon has changed so much throughout the series with new moves and appearances. So next time you’re looking to add a water or ground type to your team, consider Wooper and Quagsire! They might surprise you.