If you’ve ever battled a friend in a 6 vs. 6 Pokémon battle, you know the rush of adrenaline you get as you try to outthink, outwit, and outlast your opponent. Playing Pokémon at a competitive level against others is something that the game can’t recreate.

Even the Elite Four and Champion of any game are still limited by their teams and are almost always at a disadvantage. Non-player characters (NPCs) don’t consider team composition, switching, and items (outside of potions). You must challenge your fellow human trainers if you want to be the very best, like no one ever was.

Pokepaste is a text that imports teams of six Pokémon into the Pokémon Showdown online battling simulator. By sharing teams with others, Pokepaste can be used to significantly reduce the amount of time needed to “build out” a team.

For those who play the Pokémon Video Game Championship Series events, PokePaste is a great way to test out a variety of Pokémon teams and strategies so that you can be as prepared as possible for live, in-person competition.

Training a full team of six Pokémon for a battle is time-consuming. To compete at the highest levels, your Pokémon must be (nearly) perfect. This includes having Pokémon with the correct Nature, IVs, EVs, move sets, and items.

Within the game, this means breeding Pokémon at the daycare facility until you get the proper nature, IVs, and egg moves, then training the Pokémon for EVs, and finally having them hold the correct item for battle. If that sounds like a lot of work, that’s because it is! Even though I can make competitive Pokémon often, it still takes me 1–2 hours to make one from start to finish—breeding, training, leveling, and getting the correct item.

With that much time commitment for just one Pokémon, the process of training six is a true grind. But what if you need to swap out a Pokémon for a different option? Or do you realize you picked the wrong move set or nature? That means starting the breeding process all over again!

For most battlers, battling is the fun part and what you want to spend your time doing. The time wasted breeding and training is time you could be battling! So how can you get around that? By battling online with a community of fellow battlers using teams created with coded scripts.

In this case, battling online isn’t what you might think, and it isn’t using your Nintendo Switch Online account to battle fellow handheld gaming console enthusiasts. Instead, you fire up your desktop computer, laptop, or tablet and visit pokemonshowdown.com.

I first got involved in the online battling scene about ten years ago, and I enjoyed the ability to make new teams and test how well the Pokémon performed together as a team. I started during the Pokémon Online era, once the standard for online battling. In recent years, Pokémon Showdown (PS) has become the gold standard in the battling community.

One major benefit of doing Pokémon battles on PS is the ability to do more battles over a shorter time frame. When you battle someone over Wi-Fi in Pokémon Sword or Shield, the battle (including connection times) can quickly run over 20 minutes.

But on PS, the average battle time is probably closer to five minutes! Quickly assessing your team and seeing what can be improved is a very helpful learning tool. It’s like being able to train in a hyperbolic time chamber—level up your skills fast!

Pokémon Showdown has battles of all kinds. The most popular are probably 6 vs. 6 singles OU, followed by Doubles VGC. Learning about the different battle types is helpful for you to build the right team to bring to each battle.

Have you ever battled a friend for fun and got mad when they brought out Mewtwo to take on your Golduck? Not a good feeling. Pokémon Showdown helps balance the strength of each Pokémon by binning them into tiers based on their overall strength, prominence, and usage in the current metagame. The most popular tiers are listed below:

Building your team is fun, but it can quickly get overwhelming, especially if you don’t know much about the tier in which you want to play. Choosing move sets, abilities, and EV spreads for your team can take trial and error, but in recent years the online battling community has supported others by offering teams to try out. That’s where PokePaste comes in!

From Paste to Pokémon

PokePastes (created at pokepast.es) are a series of text lines that can be imported into the Pokémon Showdown Teambuilder to get your team ready for battle quickly. When done correctly, these pastes include everything you need for your Pokémon (item, ability, EVs, IVs, nature, and moves). Below is an example of a PokePaste for one of my favorite Pokémon, Tyranitar:

Let’s break down what these lines of text mean, piece by piece. First, you need the Pokémon’s name. Remember to spell it correctly! The “@” symbol designates that Tyranitar is holding an item (in this case, a choice band). Not including an “@” or an item name will mean the Pokémon isn’t holding an item.

If you want to personalize the Pokémon a bit more by adding a nickname or gender, modify your text string on this first line. Below is how to tweak the line to get more personal with this Tyranitar:

Now I have a male Tyranitar nicknamed “MountainMan” holding a Choice Band! To be clear: if applicable, the nickname is first, then the Pokémon species name in parentheses, then the gender in parentheses. But remember, nickname and gender aren’t necessary and don’t need to be included if you don’t care about it. Let’s move to the next few lines.

Here we decide the ability, EVs and IVs, and nature. Ability is first and typically a pretty easy decision. Most Pokémon only have one or two usable abilities, and team composition sometimes helps sway your thinking if it is truly a toss-up. For this Tyranitar, Sand Stream is the way to go.

The next line is EVs, which can be pretty straightforward or complex depending on the Pokémon and the tier for which the team is being built.

In most cases, maxing out (252) in two states plus 4 EVs into a supporting stat is optimal. However, in specific game modes like VGC, EV spreads can get much more complex as Pokémon are raised to outpace (or under pace) certain threats, survive specific attacks, or ensure they can knock out other Pokémon with a given move.

While this line can be complicated, the good news is that if you put 0 EVs into a specific stat, you don’t need to specify it—PokePaste assumes the EVs are 0 if nothing is written.

Similarly, if you don’t need to tweak the IVs, PokePaste will assume/provide your Pokémon with max IVs (31) in every stat. If you need to change the IVs for your slow trick room team or reduce the attack IVs on a special attacker, you can input them the same way you do IVs.

So let’s say I want to have my Tyranitar be a trick room attacker instead. I would just need to add an IV line that looks like this:

Last in this section is nature. Remember to spell out the specific one and then write the word “Nature.” It needs to be “Adamant Nature” not “Nature: Adamant” which is slightly different from the ability line.

For your team, choose the nature that fits the Pokémon the best. If they are a fast attacker, give them extra speed. If they are a defensive wall, increase those defenses! Other optional unique personalization for your Pokémon can be added in this section, such as shininess, level, and happiness.

Let’s say I want to make this Tyranitar level 75, shiny, with 0 happiness because I might have it learn frustration. I would write all of that as:

Again, adding the text for level, shininess, and happiness isn’t necessary. If you don’t include text for these lines, PokePaste assumes a level of 100 (or 50 for VGC), a non-shiny Pokémon, and a max happiness value. Usually, these assumptions are helpful and will save you some time.

The last part of the PokePaste is the four lines for the move set. Moves may change frequently depending on the coverage you need on a specific Pokémon for common threats to your team. Select or type out the four you think will work best and modify in PS as necessary.

Let’s say you are playing an older generation and want a Tyranitar with Hidden Power Fire to surprise Pokémon like Ferrothorn or Scizor. You would type it as:

You now have a good understanding of PokePaste! One Pokémon down, five to go. Get your team uploaded and start battling!

Answer: PokePaste is a tool to quickly upload teams to Pokémon Showdown to use in online, tier-based battling systems. You can use PokePaste to share a team with someone or try out someone else’s team. Trying out different teams helps you learn strengths and weaknesses and how to build a good team for the current metagame.

Question: What information do I need to create a PokePaste?

Answer: Not much information is required—some are optional, and some are assumed if nothing is written. Required information includes the Pokémon’s name, ability (if there is not more than 1), nature, and at least one move. Everything else is optional or assumed. When making a polished team, you will need to specify the item, EVs, and all four moves at a minimum.

Question: I made a PokePaste for my team. What do I do now?

Answer: Go to the Teambuilder in Pokémon Showdown, select the format, then click “Import from text or URL.” Then, highlight and copy your text from PokePaste, and paste it into the large white box. Click save, and your team is ready!

Pokepaste is a useful way to swap teams with other online battlers. It can dramatically cut down on the planning process when building teams and enables trainers to spend more time battling others and scouting the current metagame state. Once you’ve learned the ropes, pass along your knowledge by making your own unique Pokepaste to share with a friend or the online community. Take a paste, leave a paste! 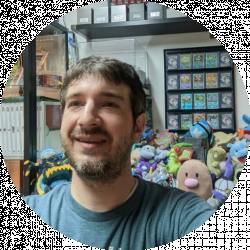 Tony Bresnen, Pokémon Collector Supreme
Tony Bresnen has been writing his whole life, but never thought he’d end up doing it professionally. An editor and writer working in the public sector, Tony is thrilled to write about his passion since childhood—Pokémon. He was hooked the moment he powered up his purple Game Boy Color and started Pokémon Blue in 1999, choosing Squirtle (the only logical choice). Over the years, he’s played just about every Pokémon video game released by Game Freak. He began collecting cards in 1999 but got away from it for about a decade. In 2012, he started collecting again and enjoys completing sets, displaying rare and valuable cards, and playing the card game casually with friends. Outside of his near-obsessive Pokémon hobby, he enjoys spending time with his wife Nicole and two young children. He hopes to pass along his love of all things Pokémon to both of them and keep them away from the influences of Team Rocket.  Other hobbies Tony enjoys include fish keeping (lots of aquariums at home), gardening, PC gaming and building computers, ping pong, and tennis.