An Acerola Pokémon guide will help you set things straight regarding this ghostly girl. When I met Acerola in Sun and Moon, I was excited to get to know her because she gave me Sabrina vibes. I soon discovered that she didn’t possess the same darkness as Sabrina. She’s just a sweet girl who loves her friends and families – that may or may not be connected to the spirit realm.

Because Acerola is a member of the Elite Four, she’s a relevant character in the games even without a backstory or personality. She’s not only unique, but she’s strong enough to join the Elite Four.

Acerola is a Ghost-type trainer that eventually becomes an Elite Four member. There are differences between Acerola in the anime and in the games, but her personality and love for Ghost Pokémon are unwavering.

Acerola in the Anime

Acerola has memorable episodes in the anime. In the games, she is involved in specific “quests” that show her personality well, which is what I love about her. But the anime does an even better job of featuring Acerola.

Acerola first appears in Why Not Give Me a Z-Ring Sometime? where she is introduced as a big sister who reads her little siblings a scary story about a Gengar. She first says it isn’t real but soon finds out it is whenever it terrorizes Team Rocket.

Whenever Acerola tries to intervene, she gets hurt and finds out Gengar shows empathy towards her. It turns out the Gengar just wanted someone to play with and wants Acerola to stick around. She meets Ash when Ash goes looking for the Island Kahuna, which happens to be her “uncle.” She is the one that convinces the Kahuna to give Ash a chance and battle him.

When he lost, Acerola took Ash to train. Though she appeared in a few episodes after that, the most notable appearance is A Haunted House for Everyone! when she visits Ash’s school. When Lana’s sisters want to visit a haunted house, Acerola knows just what to do – build one! However, things don’t go so well when the house really is haunted.

Acerola in the Games

Acerola doesn’t play a huge role in the games, but I do remember her in Sun and Moon. Because I love taking pictures in games, I remember when she asked me to do so.

The abilities and level of the Pokémon that Acerola change whenever you rematch her, but the Pokémon don’t. In Sun and Moon, you first meet Acerola when she is a Trial Captain.

She asks you to take a picture of Gastly, Haunter, Gengar, and Mimikyu. Whenever she is around, strange things seem to happen. An old supermarket seems to be haunted by a Totem Mimkyu. After you defeat it, Acerola will give you a Ghostium Z.

Whenever you see her again, she is a member of the Elite Four. This proves that she’s even stronger than she seems. I never expected to see her in the Elite Four the first time I met her.

In Ultra Sun and Ultra Moon, Acerola is still a Trial Captain, but she doesn’t play as large of a role and instead functions primarily as an Elite Four member. However, there is one small Easter Egg where Acerola appears as a ghost.

How to Defeat Acerola

Defeating Acerola isn’t difficult unless you’re under-leveled. The problem arises whenever you have to have a good team for the entire Elite Four in Sun and Moon. But if you’re here, it’s because Acerola is your hurdle.

Acerola uses only Ghost Pokémon, but all of her Pokémon are dual-type, making it more difficult to counter her. The secondary types are Dark, Flying, Grass, Ice, and Ghost. The obvious choice is Dark, but you can also use the counters for each of the other Pokémon that she has. I suggest Fairy, Ice, Fire, and Rock. But you can use others that counter the secondary types too.

Just remember that she’s not the only Elite Four member. It’s best to get a good team against the Elite Four. But if you are struggling with Acerola in particular, you can choose a couple of Pokémon to defeat her.

This is an example of the type of team that I would use to defeat Acerola if she were the one that was giving me a problem. Make sure that if you have trouble against Hala to switch out and leave yourself with only one dark Pokemon.

I love to keep a Weavile around because Sneasel is one of my favorite Pokémon. Weavile is Dark and Ice, so she’s good against Ghost and will do double damage to Drifblim, Dhelmise, and Palossand because she is Ice.

That said, make sure that you don’t use Weavile against Hala because he will do four times the damage with all of his Pokémon. If you don’t have a really good Weavile, switch this slot out for something you’ve spent time powering up.

Tyranitar is Dark and Rock, so he is useful against Drifblim and Froslass with his Rock attacks and everyone with his Dark attacks. I don’t recommend using both Tyranitar and Houndoom unless you have a trump card to use against Hala.

I always keep my starter with me when I go competitive, even against NPCs. Unless you play in an unconventional way, your starter is probably the strongest Pokémon in your party.

Since none of the starters are weak against Ghost, any will do, but if you chose Litten, then Incineroar will destroy Acerola because he’s Dark. The others are still good choices, though.

Bewear is such a tanky Pokémon. But if he has Fluffy, a unique ability to Stufful/Bewear, he’ll take half damage from physical attacks. Just make sure you switch him out if you face any Fire Pokémon later.

Bewear takes the place of where I originally put Snorlax. Snorlax was always my tank in the first generation, and Bewear is just as good. Although he is Fighting-type, so he would win against Snorlax.

Lycanroc has good base stats but is otherwise just a simple Rock-type Pokémon. I still recommend him because he can withstand a lot and will do extra damage against Drifblim and Froslass.

Just switch him out whenever you face Dhelmise and Palossand because he will take more damage. It’s still worth it, in my opinion, if you can time it all right, especially if you have a max level one.

I didn’t mean to find amazing Acerola cosplay, and yet that’s exactly what I did. I love cosplay and wish I had more time and money to dedicate to the cause. But until then, I’ll have to live vicariously through other cosplayers.

There’s art going around of Acerola dressed as Mimikyu, which is straight from Pokémon Masters EX’ Halloween update in 2020. I love when cosplayers think outside the box and pull off something like this.

I can’t decide which Acerola as Mimikyu I like better. You can see the full cosplay with this one, and the vibe is more whimsical and less serious. They are both so good, so I’m not going to choose one.

Lillie is an important character in Sun and Moon, and here we get to see her with Acerola. I don’t remember if the two ever met, but this cosplay doubles as fan fiction that I didn’t know I needed.

Sometimes I like a simple cosplay that gets right to the point. Everything about this is fairly accurate and natural. The aesthetic is captured well and reminds me of what Acerola may look like in real life.

I love fan art, and Acerola fan art is no exception. I’ve seen a dozen or so Acerola fan art pieces that I like, but I decided to share the few that I fell in love with. These are sure to make you fall in love as well.

I couldn’t help but share a Mimikyu/Acerola costume swap first. I am in love with this art – from the style to the details to the concept – it’s perfect. Now to put this as my lock screen.

When Acerola Was Young

I love to imagine what characters were like before we meet them. Was Acerola lonely before her siblings were born? Perhaps she spent most of her time with other Ghost Pokémon Misdreavus.

This art style is so good that I cannot find a single flaw in it. Midori Matsui is a legend, killing it repeatedly with their art. It’s hard to believe that this isn’t licensed yet because it should be.

I’m in no way an advocate for maid cosplay, but with recent anime such as RE: Zero (Rem/Ram) and recent games such as Genshin Impact (Noelle) I can appreciate it as art. That’s what this Acerola masterpiece means to me.

Question: Is Acerola a Ghost?

Answer: Acerola probably isn’t possessed nor a ghost. There are speculations that she is a transformed ghost, is possessed by one, or that she is straight-up dead. But the conspiracy has not been confirmed.

Question: Why Does Mimikins Float?

Question: When Did Ash Meet Acerola?

Answer: This confused me too because Team Rocket was the first to meet her in the anime, but Ash did meet her before his friends did. Ash met Acerola whenever he went to look for the island’s Kahuna.

Answer: Nanu isn’t Acerola’s uncle. She does call him “uncle” but he is not related to her. It seems like he’s a father figure to her as her real father never shows up in the anime.

Question: Is Acerola the Same Age as Ash?

Answer: In the anime, probably, but in the games, her age isn’t as easy to tell. She is between 11 and 19 in the games, as 11 is the age one must be in the Island Challenge, and they must move on from being captains when they turn 20.

Acerola and Her Spooky Self

Acerola is a wonderful big sister and a sweet girl overall. If she were to be a Water Pokémon trainer, I might not think of her often. But she reminds me of a young and kind Agatha because of her love of Ghost Pokémon. I always thought that those to who Ghost Pokémon are attracted have a vibe that no one can touch. Ghosts see the real us rather than who we present ourselves as, and they love nothing more than having fun.

Acerola is a bubbly and protective young girl who is always up for giving second chances and connecting with new friends. I love that they added another supernatural character to the Pokémon world. 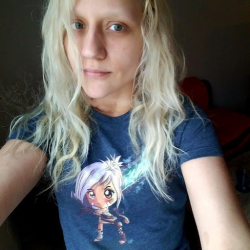 Emily Medlock, Resident Pokémon Go Expert
Emily is our resident Pokemon Go expert who still wanders streets aimlessly and get's in those steps to get her hands on new and exciting Pokemon walking amongst us in AR form. Outside of Pokemon, she loves mainstream RPGS and survival games, with Ark Survival Evolved being her main squeeze.